Amed was I nice place to relax for a day. I was only going to spend a day. Time was running out on my Bali roadtrip, and there were more places I wanted to see.

But Nyepi, Balinese New Year, was coming up. Nyepi is known as the day of silence, when the entire island is shut down. Nobody is allowed outside, no work may be done, no fires may be lit. I wouldn’t be going anywhere.

The day before the silence starts, giant figures representing demons and malevolent spirits called ogah-ogah are paraded through the streets. At the end of the night they are burned. Constructing then destroying the ogah-ogah is a way of purifying the island for another year.

While driving around in the days leading up to Nyepi, I saw ogah-ogah being constructed in practically every temple. They are incredibly detailed, and contorted into strange poses.

Most of the figures represent Hindu deities, but they are not limited to those. I also saw Death wielding a scythe, and Chucky, the evil doll from the movie.

I was worried I would not get to see impressive ogah-ogah in such a small village. My fears were misplaced. The nice family at my homestay offered to take me to the ceremony.

At the appointed time, I got on my bike and followed the family of three on their bike to their cousin’s house. There they dressed me in a nice sarong, sash, and headdress. Then we headed for the parade.

Processions of children carried the giant statues on bamboo scaffolding accompanied by Balinese music. They figures are not heavy. Everybody looked like they were having fun.

Next we headed to the main town, where everybody was sitting in the street. We joined them for the ceremony. Everybody added their offering to a huge pile. Holy water was sprinkled on the crowd, and people put flowers in their hair. Afterwards women retrieved huge baskets of fruits from the pile.

It was getting dark, and it was time for the main event. It was incredible. Each group ran in with their ogah-ogah, then spun and shook it around. They were constantly moving, making photography difficult. An announcer hammed it up and talked like each ogah-ogah in a different scary voice. The crowd was enthusiastic and full of energy.

I was worried that there wouldn’t be many ogah-ogah in such a small village. But there were a lot, and the parade went on for a long time.

After the main parade, they came back on their way to be burned. This time the handlers really shook the platforms. Pieces came off, which people grabbed. Some of the figures broke off their stands, and were laid on their platforms. Guy had torches and were breathing fire.

Along with everybody else, we got on our bikes and followed the procession, which was slow and crowded. People were grabbing the ogah-ogah and breaking hands and heads off. We passed a big bonfire, but didn’t stop. Nobody else was stopping either. Apparently, the main event was over, and this part was not meant to be watched.

We headed back to the family’s house, and spent some time with their extended family. They gave us food, which we ate with our hands. The food was different, not like anything in any restaurant. I also sampled some of their palm wine, which was tasty.

It was an incredible night, and authentic. Seeing the ogah-ogah was my best experience on Bali. 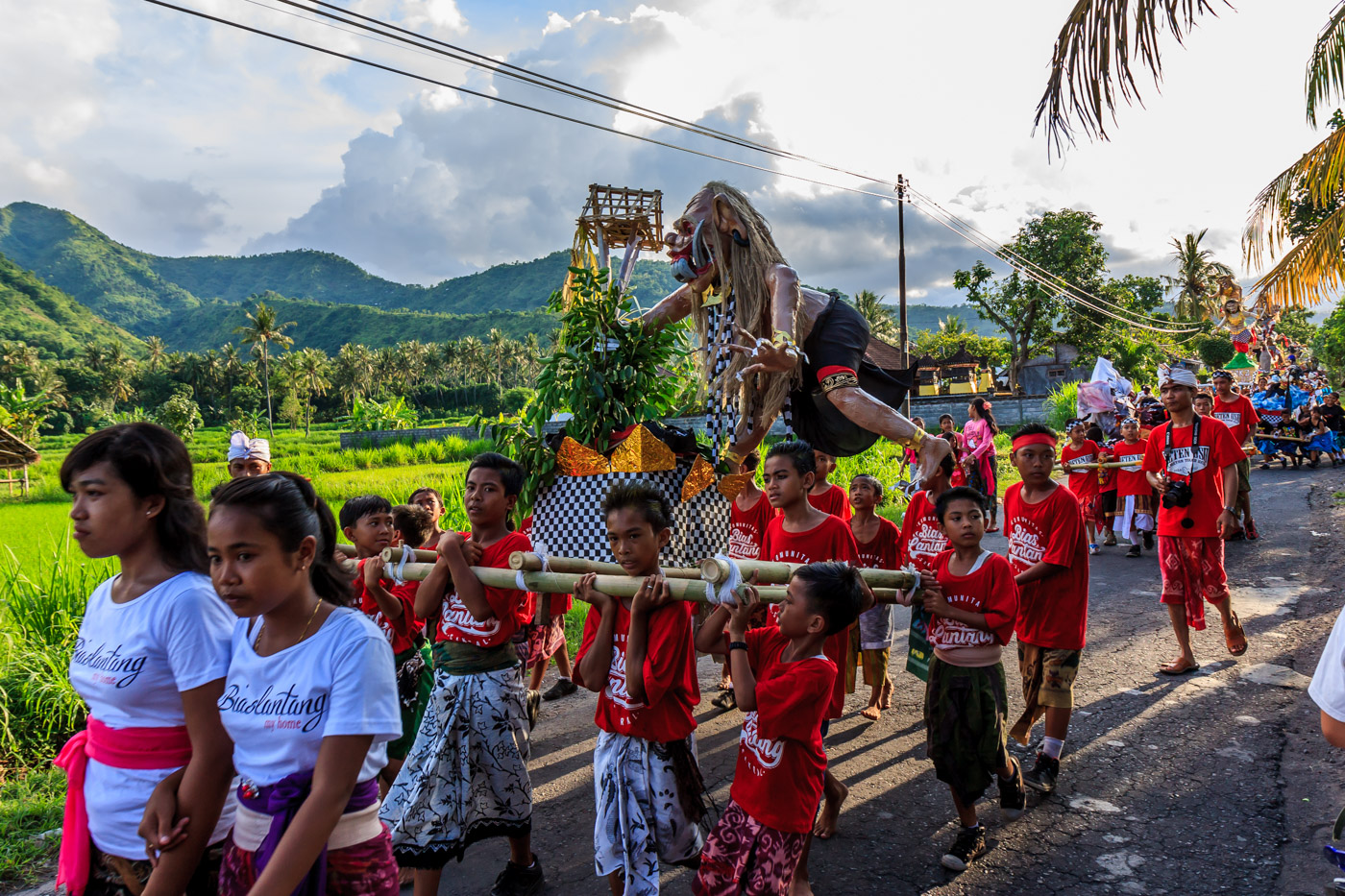 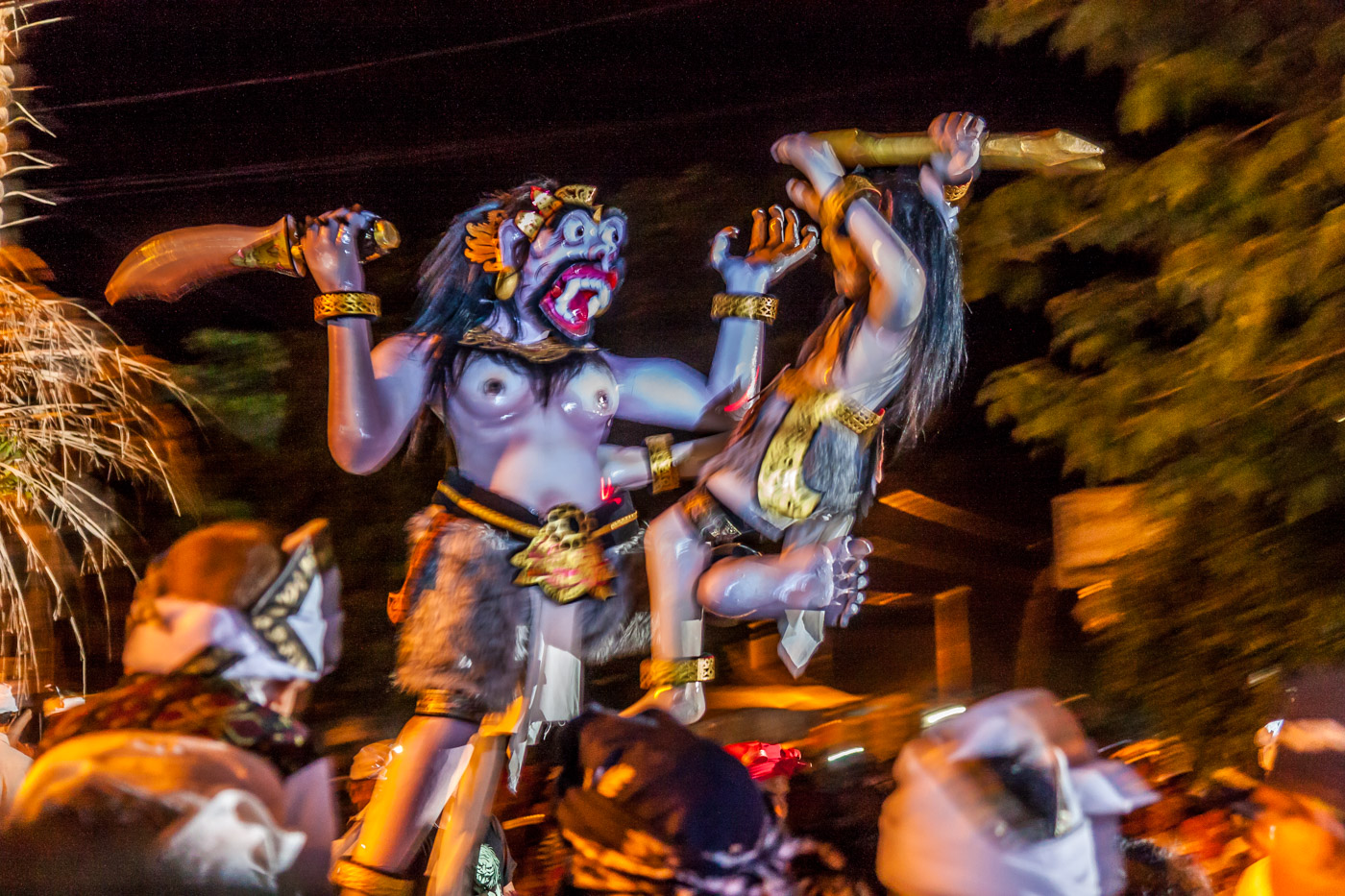 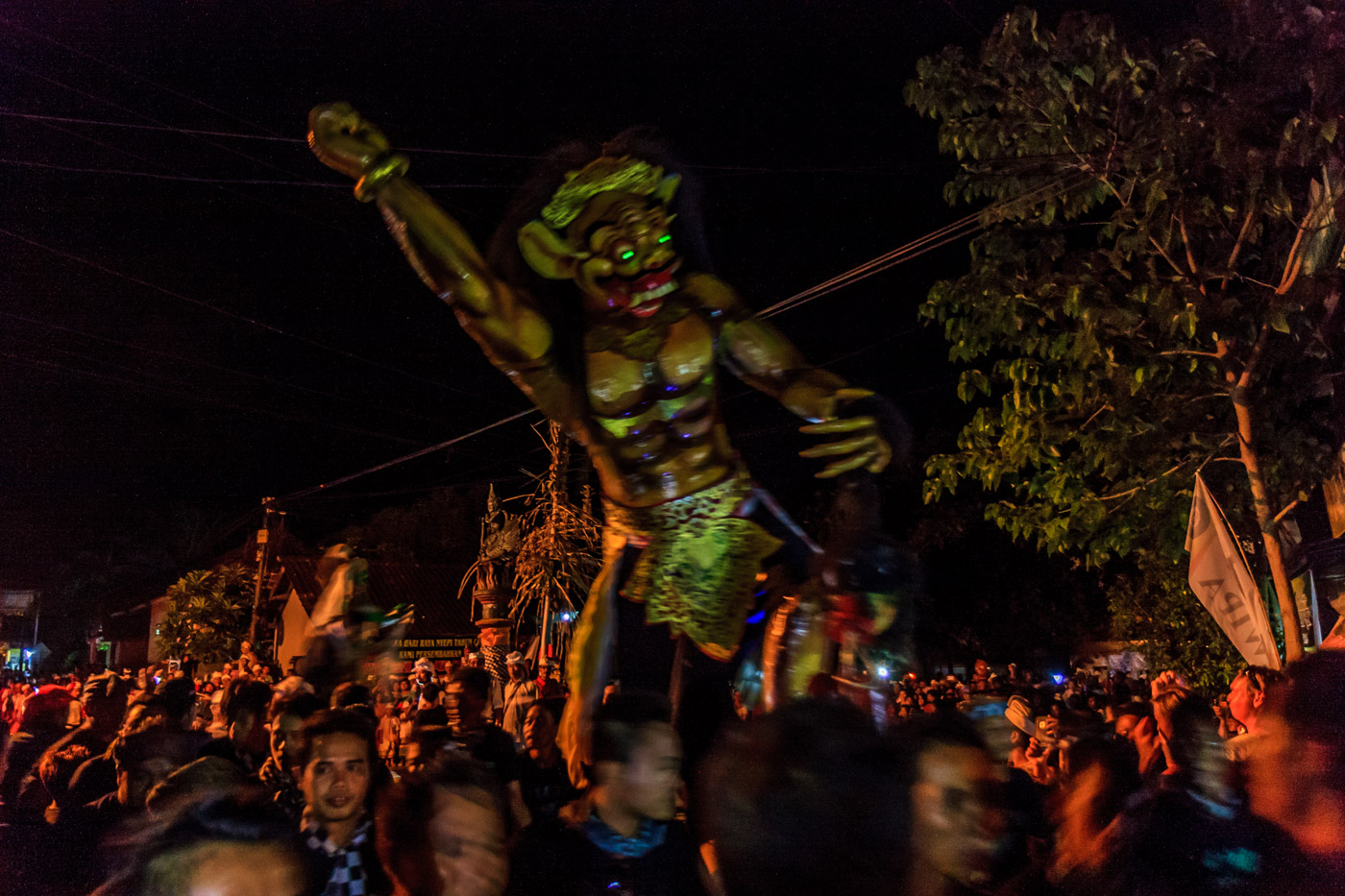 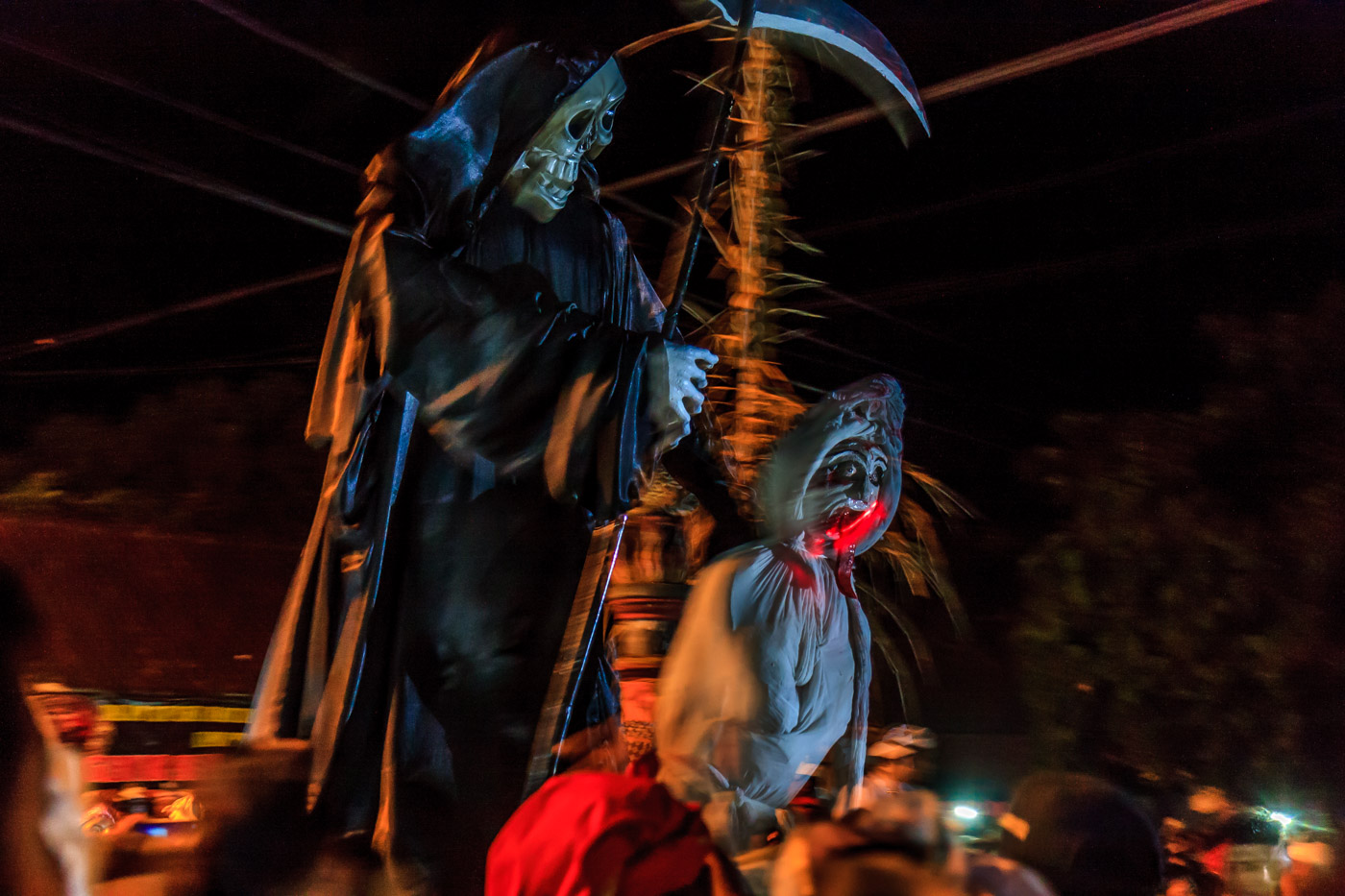 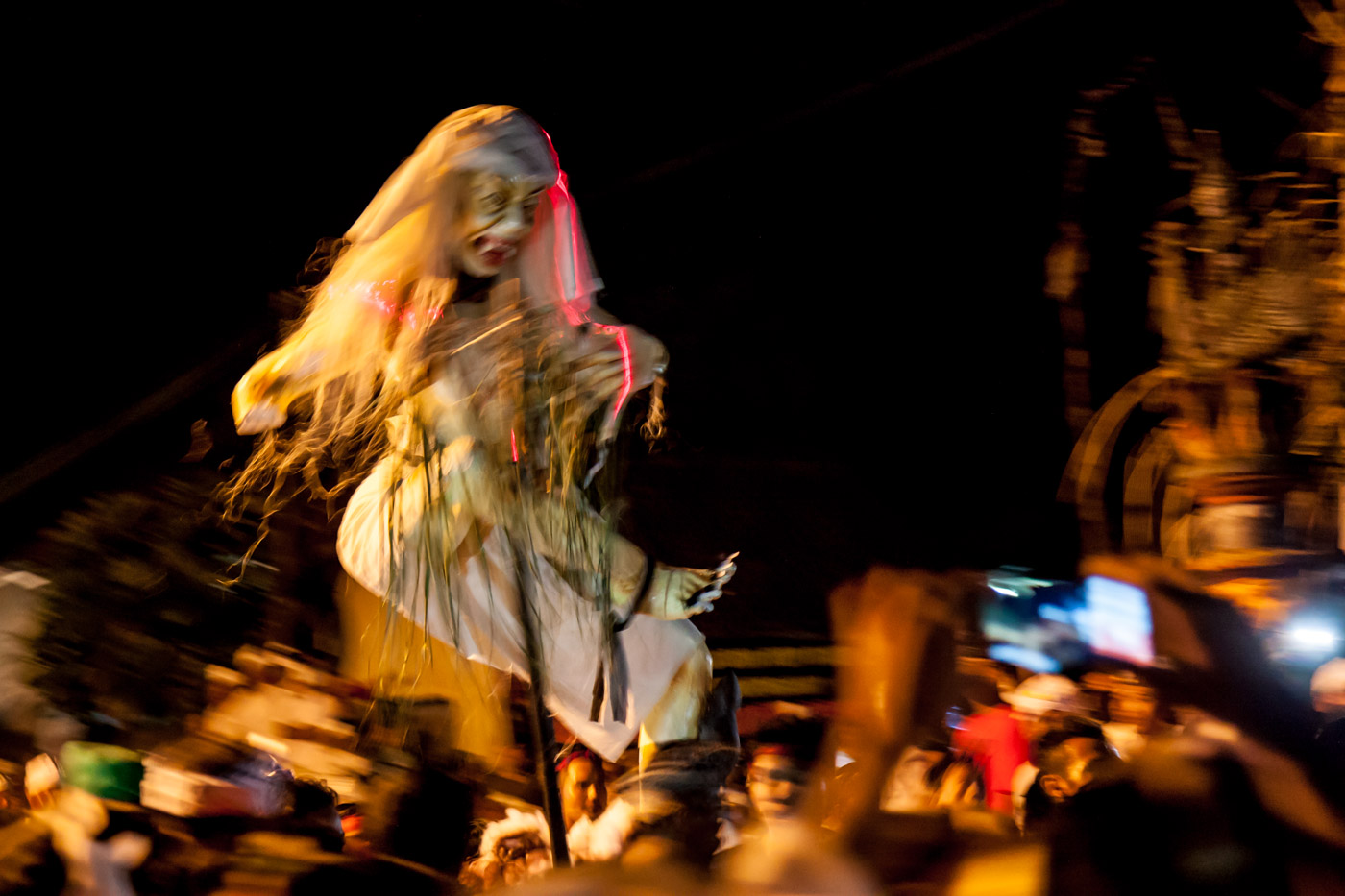 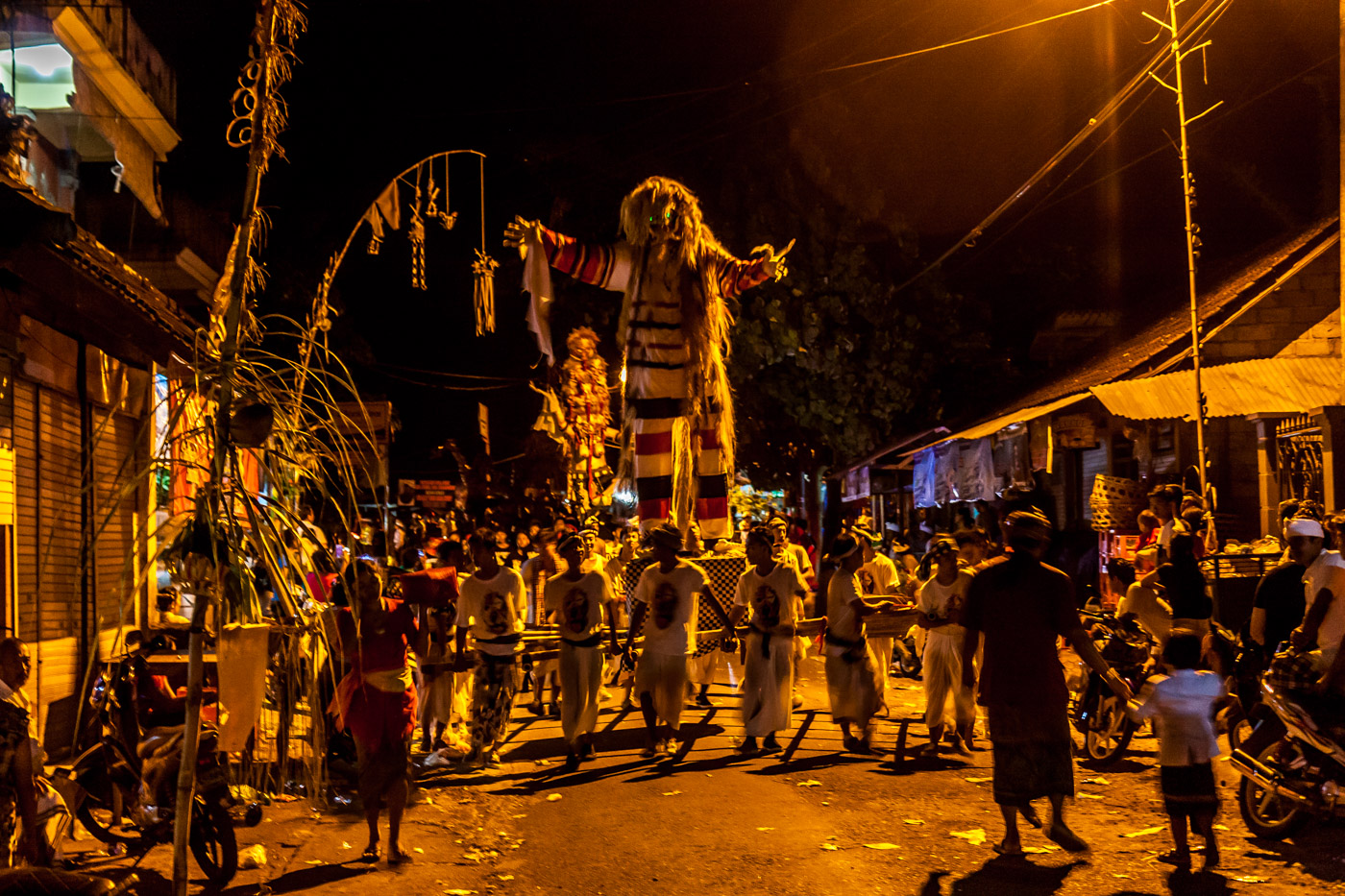 Like what you read? Have a question? Cancel reply